Markets ended the short week in the black despite sustained volatility as traders worried about escalating tensions in Syria and the prospect of an end to the Federal Reserve's economic stimulus. For the week, the S&P 500 gained 1.36%, the Dow climbed 0.76%, and the Nasdaq rallied 1.95%.[1]

Tensions in Syria accounted for a lot of the volatility we saw last week as members of the Obama administration urged humanitarian intervention in the country's bloody civil war. Investors also reacted nervously to sabre rattling between President Obama and Russian President Putin over Syria. The prospect of military action has also affected oil markets, causing the price of West Texas Intermediate to close at $110.63, its highest close since May 2011.[2]

Stocks shot up midweek following a weaker-than-expected August jobs report, a key factor in the Fed's deliberations about tapering. While the headline unemployment rate fell to 7.3% - a 4 ½ year low - nonfarm jobs grew by only 169,000, missing expectations and raising questions about whether the Fed will wait to cut back on its easy money policy. A positive jobs report was expected to be a crucial piece of evidence in the Fed's debates about when to taper its $85 million per month bond-buying program. However, the tepid report casts doubt on whether the Fed will turn down the dial after its September 17-18 FOMC meeting.[3] While we're not sure what will happen this month, Fed hawks (officials who aggressively support tapering) and doves (those who support quantitative easing) agree that the Fed will cut back on quantitative easing this year.[4]

Looking ahead at this week, we're expecting another jolt of volatility as Congress debates authorizing a military strike against Syria and analysts ponder the upcoming Fed tapering decision. A Senate vote on Syria could come midweek and a vote by the House several days later.[5] Investors will also be closely monitoring economic reports on consumer sentiment, August retail sales, and business inventories. 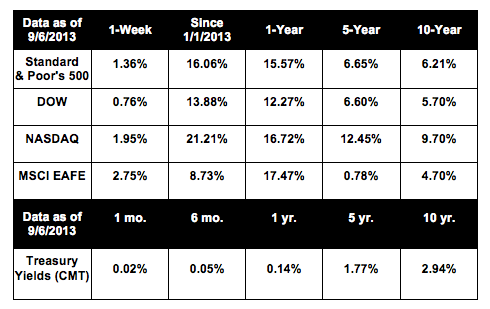 Notes: All index returns exclude reinvested dividends, and the 5-year and 10-year returns are annualized. Sources: Yahoo! Finance and Treasury.gov. International performance is represented by the MSCI EAFE Index. Past performance is no guarantee of future results. Indices are unmanaged and cannot be invested into directly.

Mortgage applications rise. Applications for U.S. home loans rose for the first time in four weeks as mortgage rates slipped slightly from their recent highs. Although demand for loans has dropped in recent weeks, rates remain near historical lows and economists expect demand to recover.[6]

Manufacturing spending grows in August. The U.S. manufacturing sector grew last month at the fastest pace in two years, which could boost overall economic growth in the second half of the year. Despite the effects of reduced government spending, increases in manufacturing activity show that the sector is doing well.[7]

Service sector growth near eight-year high. Companies in the U.S. service sector expanded at a very fast rate as sales and orders grew, and firms boosted hiring. This is a very encouraging sign for the labor market because the service sector employs nearly 90% of the U.S. workforce, including retail, construction, healthcare, and financial services.[8]

U.S. retailers rely on deals to woo shoppers. While U.S. retailers are reporting strong sales in August, many have had to rely on deep discounts to bring back-to-school shoppers in the door. The high discounting may affect their margins and profits in the third quarter but may be part of a new norm as consumers retain thrifty habits.[9]

The Standard & Poor's 500 (S&P 500) is an unmanaged group of securities considered to be representative of the stock market in general.

The Dow Jones Industrial Average is a price-weighted average of 30 significant stocks traded on the New York Stock Exchange and the NASDAQ.

The Nasdaq is a computerized system that facilitates trading and provides price quotations on some 5,000 of the more actively traded over-the-counter stock.